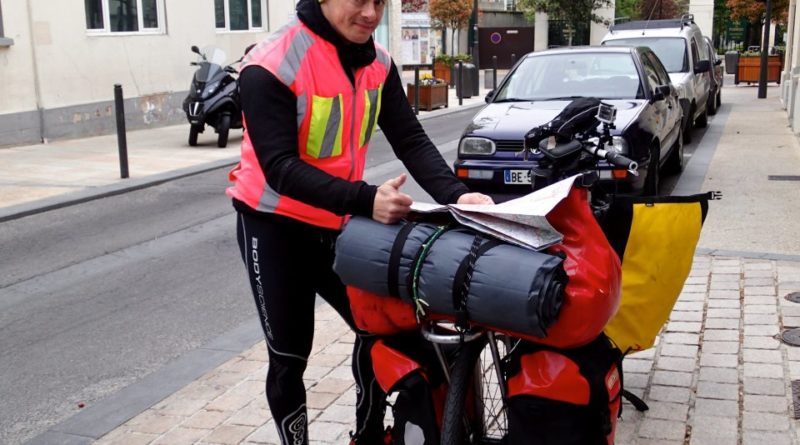 Let me introduce you our another footbike riding friend – Frédéric Benoist, French footbiker and adventurer. We made a short interview: His experiences from the journeys are unbelievable, it would be pity if he wouldn’t share them with us!

How did you come to the footbike actually?

I discovered the footbike in 2008: I planned cycling holidays but I sprained my knee ale so I had to adapt to the situation. Just few days after I could walk again I made a cycling journey from Paris to Ventimiglia in Italy (still with bandaged knee). I made regular stops after each100 – 135 km. the footbike I rode was Footbike Track. The whole track’s length was approximately 1000 km. 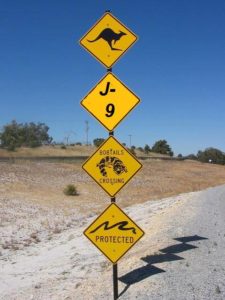 Can you tell us something about another journeys you made?

Later I bought the footbike Blauwerk Sidewalker Cruiser. I made several trips in France with it and then one in Morocco in February (That was a track between Marrakesh and Ouarzazate). I had an epic experience there: The ascent of Tizi n’Ticka which was covered in snow – it took all night.

I rode also in February 2010 in Morocco on a scooter Footbike modified 2×700, each time from Marrakesh but I went further towards south (Mhamid).

For a long time, I heard stories about legendary cycling event Paris-Brest-Paris.

Initially, I tried to qualify as a biker but since I love footbikes, it’s been niggling at the back of my mind that I could qualify as a footbiker. So I constructed a 2×700 Carbon framework: ZOCKRA (a company producing recumbent bikes that ceased to exist). I rode about 200km.

In short, it is a good place for riding a little bit but not to make an effort. The actual record performance in France are 417km ridden within 24 hours. Yet I’m afraid it can be beaten easily, since it’s not one of the very best on the scale.

In 2013 I made a journey across Australia together with my friend Bernard Deniaud – from Darwin to Adelaide. We made stops after each 75 km. We had a big water consumption of course. – between 8 and 12 litres. Therefore, the footbike TRACZER (my own construction) was in some point very heavy (almost 72 kg).

Last year I tried to ride across the United States – from Miami to San Francisco. But during the journey, I was knocked down by the car (I escaped with injures but the footbike was destroyed). 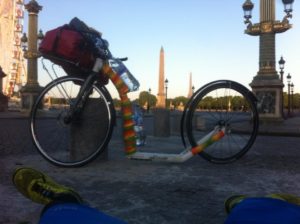 In the United States, I rode my footbike Zockra with carbon „top box“ and additionally, I had a little backpack. With all the luggage, the whole load with water and food didn’t weight above 25 kg. The shortest stretch of the journey was 64 km (I was caught in 7 storms and I got a puncture as well) and the longest 175 km.

I made a 5-day trip in Italy on the footbike Traczer Arrow (with extra wheel trailer) this spring: I rode about 460 km from Naples to Orvieto.

And then, I made a journey, still on the same footbike (Traczer Arrow), from the Alicante in Spain to Nyons in France this summer. I was only equipped with the 18 kg luggage (without food and water). I rode 1500 km altogether.

And what about your ordinary day? Do you also ride the footbike?

I ride my footbike to work and back every day, which is approximately 39 km a day. My way goes through Paris from East to West and back – I often use the footbike Mibo 2×12 (inches), which is, in general, the funniest footbike I know. During the way (especially on the way back), I have to answer curious questions concerning my footbike – I try to advertise it. I make a suggestion to these people to try it and ride it a little bit but it’s only few of them who will really try.

What do you think about the future of the footbike?

The footbikes won’t become more popular until there is more gadgets invented for them (I am talking for example about 12 to 20 inches’ wheel sizes) and until the footbikes are more focused on the youngsters as well. For example, the changeable boards with many visual varieties and shapes (as the skateboards have) or I miss some another accessory – colourful wheels, rim sticks etc. Some adaptations would be great.

And why do you praise the footbike so much? 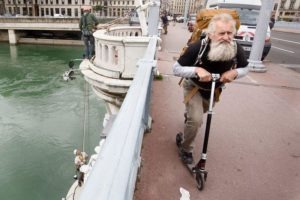 Well, I love the simplicity – it’s not the objective statement. But I adore especially these assets: Simple manipulation (the footbike doesn’t suffer so many failures so it doesn’t need to be repaired often). The footbike arouses curiosity and helps to break barriers among people who begin to talk to each other.

During my journeys, I have experienced some rich and beneficial opinion exchanges. Each day I ride my footbike to work, people encounter me. I think that I wouldn’t be noticed at all when I would go on foot or ride the bicycle.

Thank you, Frédéric, for your interview – Good luck for your future journeys!

One thought on “Footbike loving adventurer”